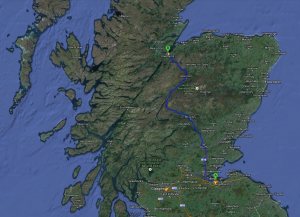 In late October, we decided to go to „the Highlands“ for a day or two. Since „the Highlands“ are somewhat a rough description and it’s rather difficult to get to spots which are interesting for hiking without a car, we ended up staying in Inverness and using it as the base for further expeditions.

The trip from Edinburgh took us three and a half hours, and you get a number of stunning views of the highlands from the bus if you go during the day. The bus stops in a few towns on the way, but mostly it’s a straightforward journey through the Highlands with amazing views of the nature and mountains of Scotland’s north.

Inverness is a quite nice, small town – the only „bigger“ city in the Highlands, and that’s a rather bold statement. With some 50,000 citizens, Inverness is not exactly a big city, but it still feels like civilisation and offers a range of hostels, which was our main reason to stay here. Since we were there anyway, we decided to take a walk through the city, and it’s a quite short walk to see the interesting bits. The Inverness castle is small, not very impressive and not viewable, since it’s still being used for government purposes (I believe it serves some Police or court purpose). The city consists of mainly one pedestrian road with a number of shops (refer to the picture) and that is mostly it. If you ever get out of this area, and that happens quickly, Inverness could quite immediately get industrial-boring-ugly – so that is not recommendable. Our aim for the first day was to see the Black Isle, which is a peninsula north of Inverness which is supposed to be very beautiful and also a dolphin watching spot. Since we were here in late October and subsequently off-season, public transport was pretty limited and we decided to walk over to the Black Isle.

That was not the best idea we ever had. The guy at the tourist office told us that it was „not a particularly nice walk“ and he was right: From Inverness centre, we walked a good half an hour through the highly industrial port area to the bridge, and a good 20 minutes over Kessock bridge, dividing the Beauly Firth (the bay west of Inverness) from the North Sea. That sounds good and would actually be an amazing viewpoint, if there wasn’t the constant roaring of cars passing by. 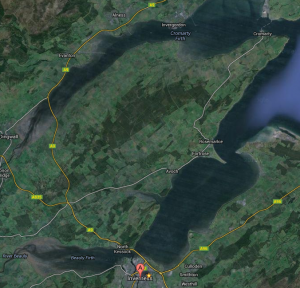 The Black Isle itself is as beautiful as it was announced to be. It’s a quite large penisula, and it consists mainly of forests, hills and farms. There is a road that goes all the way around the coast and there are a few towns spread along this road. We walked to North Kessock – hardly even a town, just a few houses by the bay – and got on the bus there to Fortrose. Fortrose and Rosemarkie are two towns pretty close to each other. They are as close as you get to Chanonry point, the very end of the spit you can see on the map there, and as this way our aim for the day, we got off the bus and started walking. It turned out that the most of the spit had been turned into a golf court. Anyway, we walked to Chanonry point by the sea, collected some shells, had a quite amazing view over the northern bay and got back to Fortrose just in time to get the very last (!) bus back to Inverness at half five (as I said, public transport is very limited off-season). 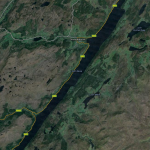 The next morning, we got up pretty early to go to Loch Ness. Yes, it’s a cliché Scotland activity and it’s just a lake and the monster hides from tourists anyway, so why bother? Still, it’s a nice piece of nature. Going there by bus from Inverness takes not even half an hour, and you end up in Drumnadrochit (seriously, no typo) from where it’s a half an hour walk to the shore of Loch Ness.

The main misunderstanding, at least for us, was that we believed that it would be possible to walk by the shore of Loch Ness once you get there. But that turned out to be a very optimistic idea. In reality, most of the west side is sheep pastures. That means that you’re not supposed to walk there, and, even worse, can’t walk there unless you have an extraordinary ability in climbing barbed wire fences. So we walked on the street instead to Urquhart Castle (again, no typo).

Urquhart Castle is a medival fortress, defended, conquered and fought over numberous times throughout Scottish history. Today, it’s a museum – which means you have to pay if you want to actually get to it – and possibly Loch Ness’s biggest tourist attraction (unless you count the monster). But even if you’re not into medieval Scottish history, Urquhart castle has a few remaining kind-of towers from where you can get spectacular views of Loch Ness. We got there on one of these very typical days when you get rain and sunshine at the same time, and the view was absolutely stunning.

And that was basically it. Not that interesting a journey and not that much to do there, but as they say, you don’t go there for the food, you go there for the view. (We actually did go for Indian in the evening and that was a quite new experience for me.) It is probably a lot better during summer season, when public transport works properly and regularly, you have more sun hours to make use of, or if you bring a car of your own to get around easier. But it’s still worth a view when you’re close – and be it only to be able to say that you’ve not missed out on Loch Ness when you were in Scotland.