I had three days of the most amazing weather in the history of Great Britain. It was sunny and warm, we climbed hills and I had lunch outside, and it was really nice all over. But I am getting ahead of myself.

I got into Cardiff via plane from Edinburgh. That takes about 50 minutes and is a lot cheaper than the train. When I got there, I had a terrible first evening: It was raining non-stop, and I only arrived at the centre around 5pm, which in almost every city in the world means that all the touristy stuff is closing now. So I walked around the centre a bit, but hid in a Wetherspoon’s relatively soon and had a massive fish-and-chips (which was fine because I had not had lunch). 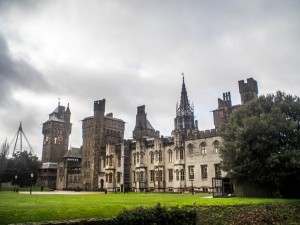 The next morning, I rushed to the Castle early to make sure I’d get in this day, and I did (as the first person of the day). Cardiff Castle is a bit of a weird castle. It looks more like a park with a little keep that looks even smaller because of the big park around and a massive house for whoever would reside there. Hence the actually interesting part is the house and not the keep. The house however is really fancy. It used to be the residence of Cardiffs number one rich-and-influential people’s family whose name I forgot, and they sure weren’t tight when it came to improving their home’s overall poshness. There’s a whole bunch of pseudo-medieval wall paintings with all the heroic deeds of their supposed ancestors, a library of the kind that I will have one day, and many more things to check out.

Cardiff Castle and a daffodil

Inside the Castle walls, you will find the old bomb shelters from World War II. These are, in their own ways, amazing: They look like they have been untouched ever since people fled here for protection. Wall posters still tell you to save butter, how to properly attach your gas mask, and why to eat cabbage instead of meat in order to protect your country. Even the benches where people used to sit during the attacks are still in place and to make it a more complete experience, there are speakers that bring you the full noise of bombers crossing over the city and explosions happening all around.

Cardiff’s second must-see is the National Museum of Wales. As anywhere in the UK, public museums in Wales are free too, and they’re incredible works of architecture. This museum has a comparably big Art Gallery on the upper floor and an equally extensive Natural History department on the ground floor. But to be honest, by now I mostly just go to museums for the architecture, and Cardiff didn’t really disappoint on that front as well; the whole building in all its neo-classicist glory is quite beautiful.

I also was in there only for a mere two hours or so, because I was sitting outside on the stairs leading up to the museum for hours before. It had gotten so sunny and warm that it was hard to justify going inside anywhere, and so I ended up finishing Christopher McDougall’s „Born to Run“ in the warm Welsh sunshine before I actually got into the museum. 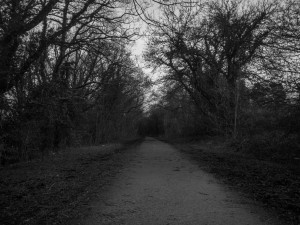 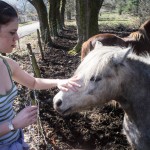 The next day, I met with Rachel for a bit of proper Welsh middle-of-nowhere experience. We saw the beautiful village of Abergavenny, the most touristy place in probably anywhere around Cwmbran [kuuhm-braan] and went for a walk along „the line“, which is where this somewhat spooky picture was taken.

The next day started out as sunny as the day before had ended, and we decided to finally climb a „mountain“ (remember, we’re in Wales). We went for one called the „British“, and, taking the scenic route, climbed cross-country up to find a herd of sheep and a bunch of friendly horses along the way. It was warm and sunny and I think I even got a bit of a tan on the way. It would have been hard not to like Wales in such great weather – as Rachel said, I’m going to have a very inaccurate image of Wales now, but that works clearly in its favour, so that sound be fine.

Anyway: It was quite a great weekend out and about in Wales, and even if you’re not a great countryside-person, Wales is definitely worth a quick trip. It isn’t nearly as interesting as Edinburgh, as overwhelming as London, as vibrant as Belfast, as chavvy as Glasgow (sorry, folks), as beautiful as Arren, or as many-sided as Dublin, but it still is a wonderful place to be and check out. And if you’re into hiking, Wales might just be the perfect place to go, given the weather is game.