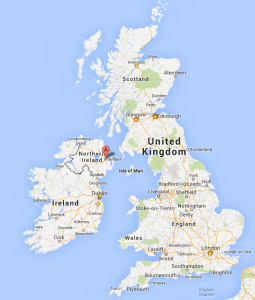 Belfast is the capital of Northern Ireland. As such, it is – other than (South) Ireland – part of the United Kingdom and actually British. That means that you can spend UK money, use your UK phone, buy UK stamps, and so on. This sounds convenient, but has created a deep split in the population of Northern Ireland: the split between those people who would rather be Irish („Unionists“) and those who would rather be British („Loyalists“). This split created the euphemistically named „Troubles“ from the 1960s until the late 1990s.

The Troubles and the „Wall of Peace“

Belfast is probably the city in which this split can still be felt the strongest. In Scotland, you do see British flags – but you see far more Scottish ones, and if you see British flags, they are usually directly accompanied by a Scottish one. In Belfast, the strong opposition between the two groups has made it much more normal to acknowledge and emphasise one’s affiliation to the UK. This goes further than I would have ever imagined.

In front of the Parliament building, we saw a group demonstrating their loyality to the UK by setting up a UK flag saying something with „loyalist“ in it. That sounds like a small issue, but it is not. If you get around the city a bit – for example in a tour bus – you will see the equially euphemistically named „Wall of Peace“, whose main function is to physically keep Unionists and Loyalists separated in order not to brain each other. It sounds absurd, but 15 years after the „Good Friday“ agreement of 1998 that ended the Irish Disagreement, the groups, arguments and problems are still pretty much the same as they always were. The „Wall of Peace“ has become a major spot for street art though and may be, similar to the Berlin Wall, one of the most impressive open-air guerilla museums of the world. The paintings that you can see there are amazing, and if you get a chance if you’re ever in Belfast, get on a tour bus and have a look yourself.

That was a pretty serious introduction to a city that actually was not only interesting, but also stunning fun. Belfast is amazing! The pubs are extraordinarily beautiful. Street art is everywhere and awesome – in some areas of the centre, literally every wall is painted with amazing spraypaintings, showing a professionality, skill and dedication you will have a hard time finding anywhere else. The city centre is small – the whole city has around 200,000 inhabitants – and you can reach most places of touristical interest easily by foot (the farthest we walked was the Titanic Experience, some 45 minutes from our hostel at the very other end of the centre).

The most important central building is the Belfast Parliament, a massive block of a palace that reminded me surprisingly much of the Budapest parliament; if it had the Danube crossing in front of it, the impressive effect might even be the same. Except for that, the centre is a vibrant mixture of new stuff and old or retro style towers, pubs and other buildings. As Belfast is not that big a city, you might be surprised how few shops you will find open if you kick around the city on a Sunday morning.

One of Belfast’s major tourist attractions is the so-called „Titanic Experience“, a museum that is not quite like a museum. It’s an iceberg-like (obviously no coincidence) building on Queens Island, just a few minutes north-east from the city centre beyond the river Lagan. In front of it, there’s the massive figurehead of the Titanic that looks suspiciously like Kate Winslet in that famous scene at the bow of the ship. Once you get in, the inside architecture of the building is just completely bananas and hard to describe or photograph properly – that’s just a go-and-see-for-yourself. The Experience is mostly a very multimedial museum, including a more or less old-fashioned museum part with loads of pictures and text, but also parts where a guide will tell you the stories of the manufacturing process, a ghost train style ride through a shipbuilding factory, a cinema, touchscreen and step-on triggered information and much more things to touch, fiddle with, speak and listen to. I don’t want to spoil, but since most of you will know, and as applies to most good museums, there’s no happy end and pretty much everyone is dead by the end.

And then there was, of course, The National. We originally came to Belfast in order to see a concert, and it blew us away. It was a surprisingly small crowd, but that fit the progressive, intensive, powerful, hauntingly beautiful music perfectly. There’s not a lot more to say. If you don’t know them yet, check them out, because they’re amazing.

And that was it.

The more I keep thinking and writing about it, I think Belfast is going to be among my all time favourite cities. I was absolutely amazed by the beauty of the city as well as by the friendliness of people, and of course the wonderful company I brought along. We had an excellent time, in the very literal sense, and it will be pretty hard for whatever city comes next to keep up with this close to perfect trip to beautiful Belfast.