As I have been asked by a certain tiny British person to write my future blog entries in English and I thought it would be a cool thing to do as I have hardly ever written an actual longer „text“ in English, this shall be an attempt to write something readable, enjoyable and understandable in English. I will however surely not make a habit out of this not only because my blog is aimed mostly at my dear German friends back home, but also because it’s one of the few pieces of German I get to enjoy here. (That’s not entirely true, but we’ll get to that in a minute.)

I’ve become somewhat of a regular guest at this hostel near Cowgate, having stayed there in June to visit the city and decide whether I’d want to move there, in July to find a room, and now in early September for three more days before my move-in date. It’s been a really nice place to stay and I’ve enjoyed most of it. This time however it was different. In the early days of September, with fresher’s week just around the corner, loads and loads of prospective ERASMUS and „real“ students are looking for flats in Edinburgh, and it has been frustrating to watch all those people searching unsuccessfully for a place while I felt a bit bad for having found one already. And, the weirdest and kind of an annoying thing there was that most of them were indeed – you guessed it – Germans. I have never ever met so many Germans in one place outside Germany. Even the weather turned out to be just a continuation of German summer.

Right, even though I can’t shake the feeling that I could do a lot worse. The place I’m staying at is not only huge, has a modern kitchen, heating in every room and is thereby a lot better equipped than some place I’ve seen. Having said that, straight 90° angles in a building seem to be a weird continental thing that hasn’t come to UK too long ago, turning the shower properly to hot or cold requires in-depth scientific research, windows mostly work in a guillotine mode (push them up and hope nobody’s looking out when they suddenly crash down again) and we’ve found a mouse trap in the kitchen. 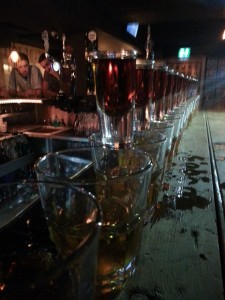 With Elli, my roommate from Munich (so much for the „not a lot of German here“ statement), I decided to try out a bunch of pubs around our new place. Since we live just a few steps from Rose Street, that was the obvious place to go and we browsed through a bunch of pubs there, namely (I think) the Black Rose Tavern, the Rose Street Brewery and the Hard Rock Café on George Street. Being not a big fan of beer myself it turned out to be quite difficult to choose a drink: What do you order in a Scottish pub? Cider, obviously. And Scotch. After two or three you won’t even notice the smoky ham-taste any more. Sláinte! Though most of the pubs we saw didn’t really look like they would float our boats, the ones we chose were mostly great – with awesome live music being played in the Black Rose and the Hard Rock Café. Our next tour will probably lead us through the pubs of Old Town, which in number and possibly in quality will might easily exceed the ones in our hood.